Autumn Term 2019 - 9 children took part in a basketball competition at Skinners School in Tunbridge Wells. We worked together as a team against some tough opposition. We drew 1 game, lost 2 games and won 1 game. We were knocked out by a strong Claremont team however we fought a good battle and was only narrowly defeated.  Alex, Eva and Lizzie were players of the tournament. 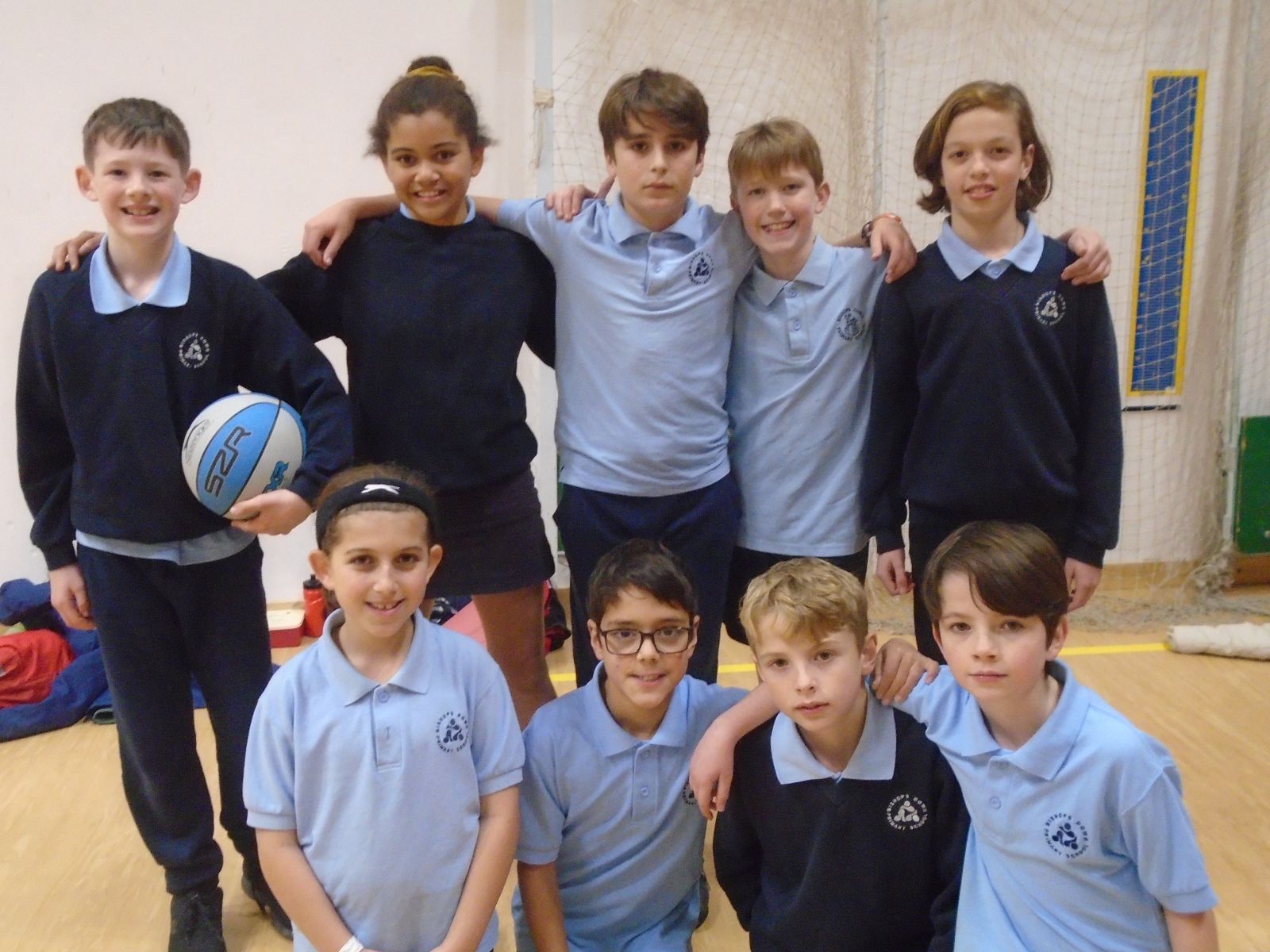 Autumn Term 2019 - a team of 19 children represented the school in athletics. 10 schools competed in the morning and another 11 schools in the afternoon, a total of 21 schools altogether. The children took part in 2 field events and 2 running events each. All children added to our overall score with some great individual results being achieved, however our top scores were achieved in boys javelin, girls chest push, girls and boys standing long jump and the 6 lap relay. We came 4th overall, this is a great result against outstanding Claremont and St Mathew's teams.  We would also like to thank Mrs Abel for her support on the day. 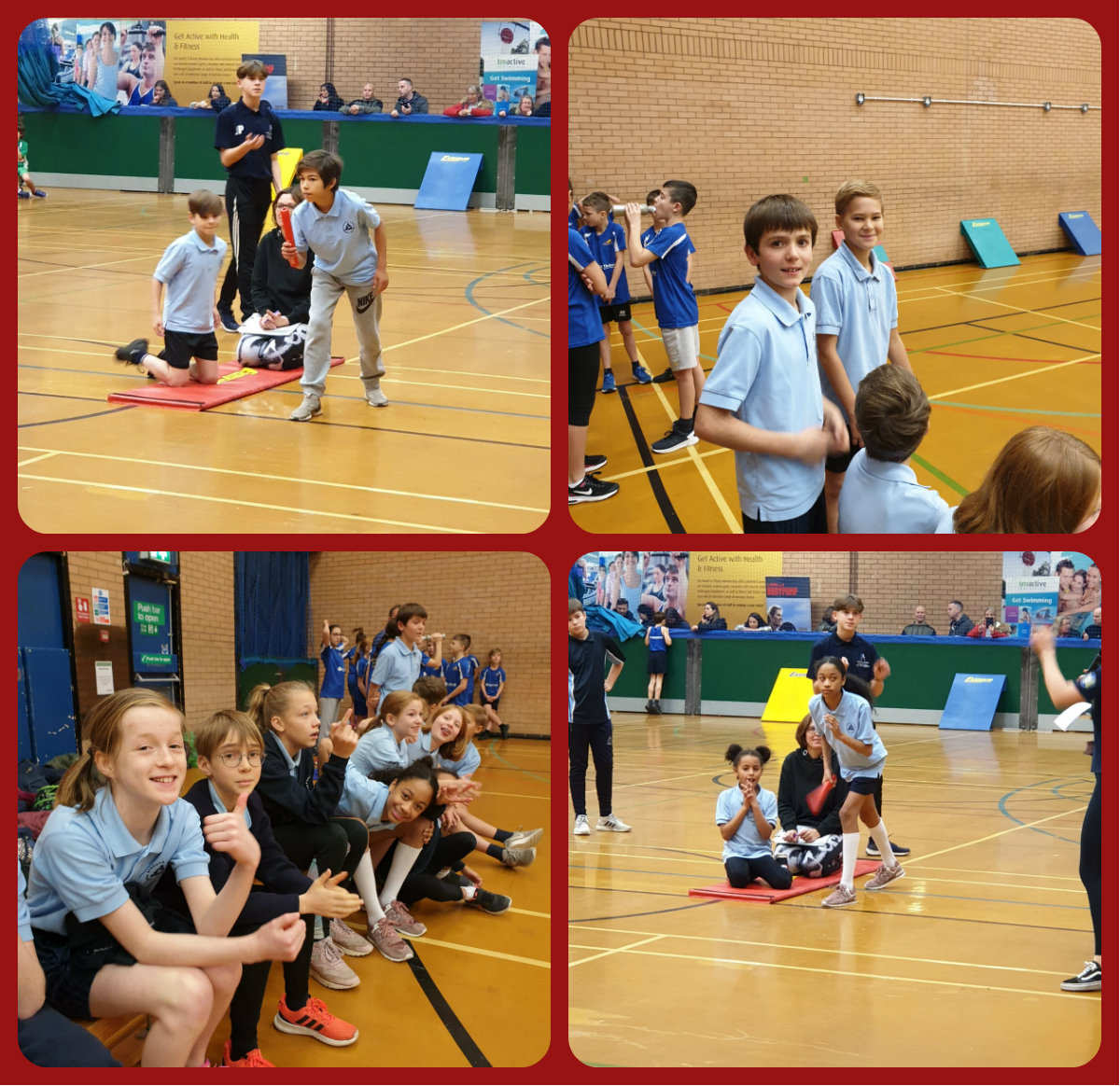 9 boys and 7 girls attended the ESFA Football Tournament on Wednesday 9th October 2019.  It was a highly competitive, exciting competition and we are really proud of both teams. The girls' team drew 3 and lost 2 and they fought a great match against the overall winners. The boys' team were in a strong group, they won 1, drew 1 and lost 2.
Girls - Annabelle, Edie, Eva, Savannah, Skye, Scarlet and Grace. Annabelle was our player of the tournament.
Boys - Lennox, George P, Henry T, Oliver H, Oliver C, Max, Rico, Logan and Owen. Henry was player of the tournament. 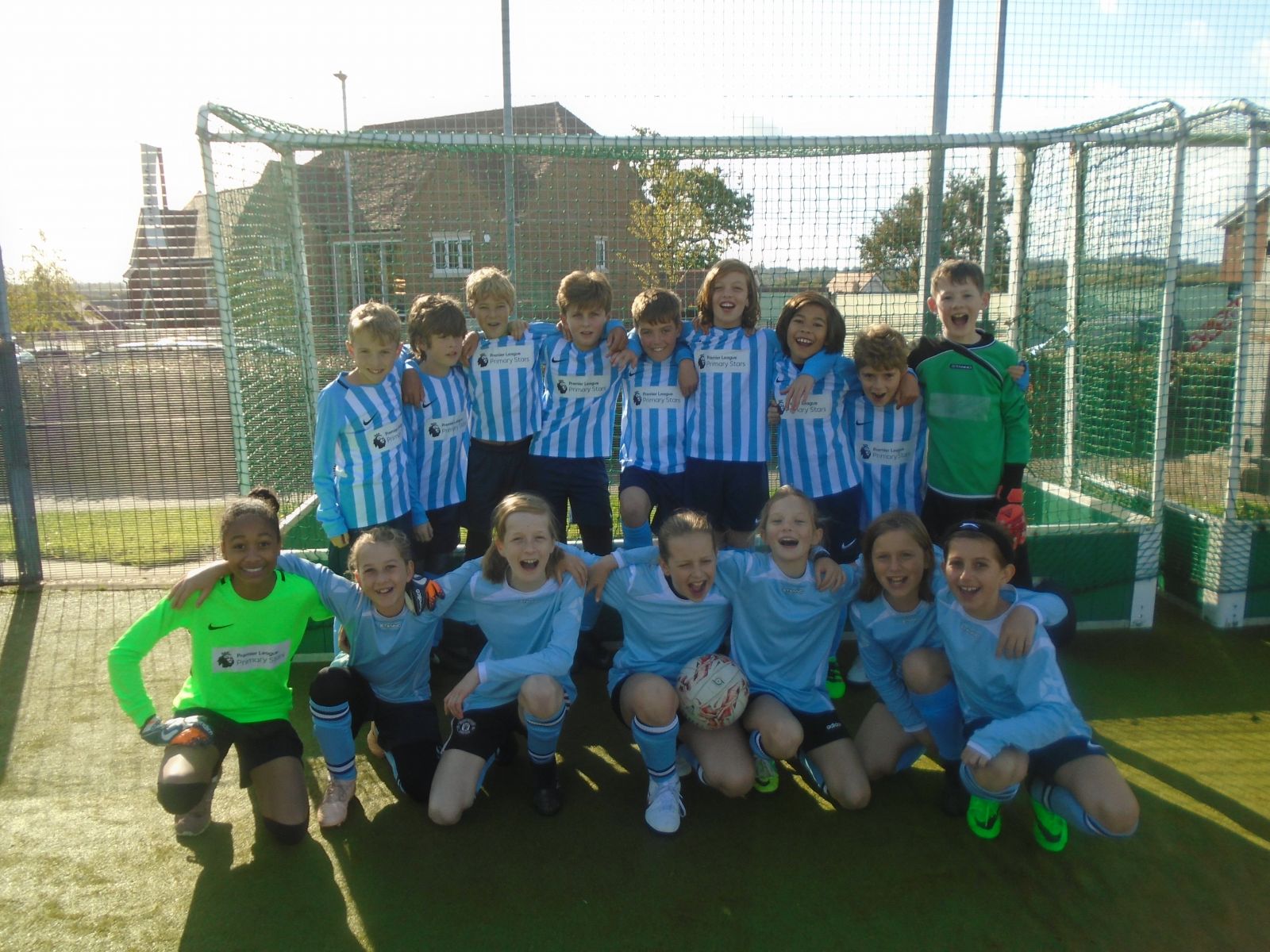 A team of 13 children from years 3 and 4 attended the first year 3-4 Rugby Festival on Friday, 4th October 2019.  The children developed their skills in a carousel of activities and then played in a mini tournament.  This was a non competitive tournament and many of the team had not played tag rugby before.  They played with enthusiasm and their skills and team work developed over the morning.

We would also like to thank Mr Osborne for helping on the day. 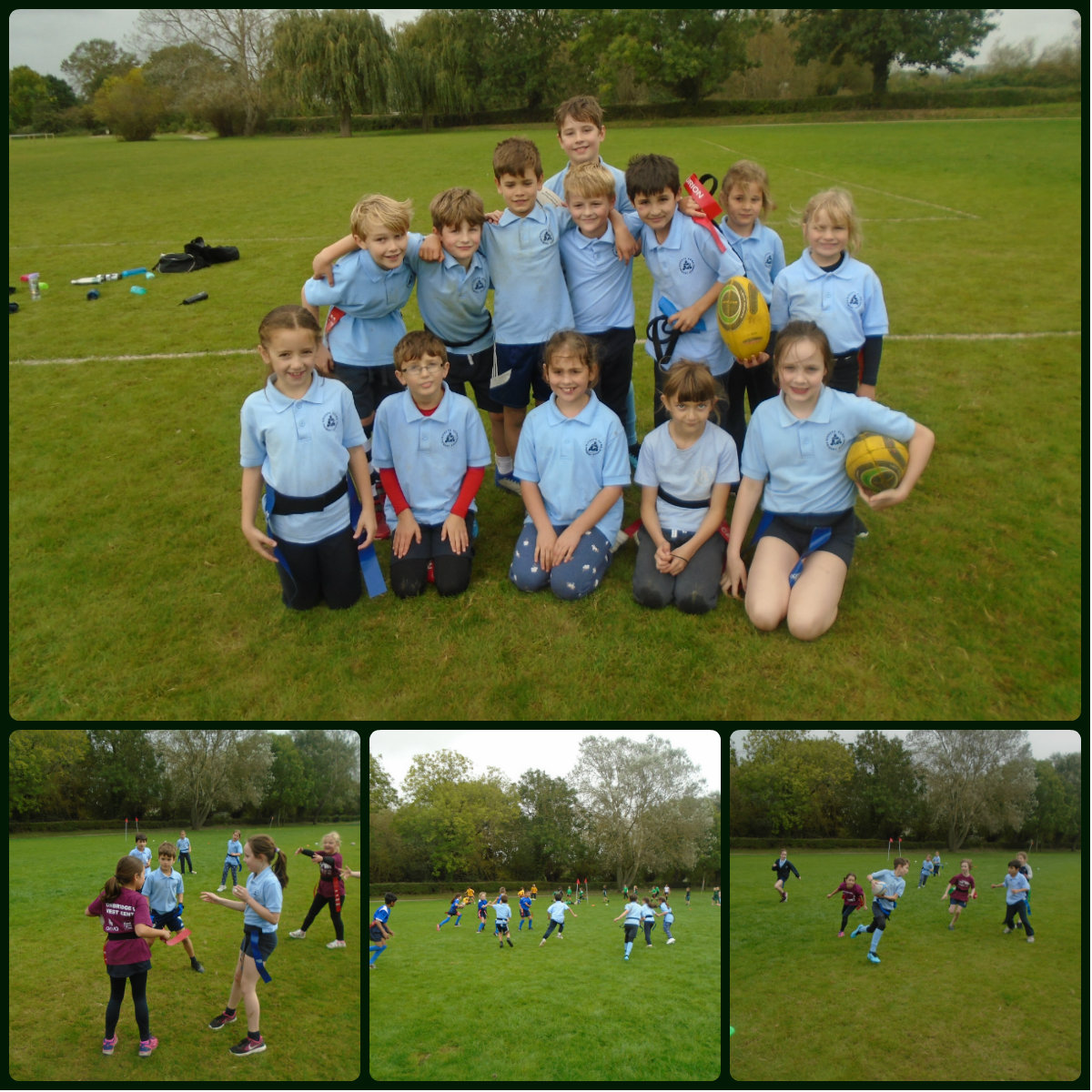 It has been an exciting year of sport. We have entered a record number of children and teams this year. This year we have entered the following sports festivals and tournaments:

We have improved in every sport this year, below is a list of the sports we achieved 3rd place or above:

We would like to thank the parents for their support with transport and managing extra teams and all the staff at Bishops Down for leading and assisting with these clubs.

On Sunday, 12th May 2019 the Bishops Down Ski Team raced in the 2019 Kent Schools Championship and all did an amazing job. 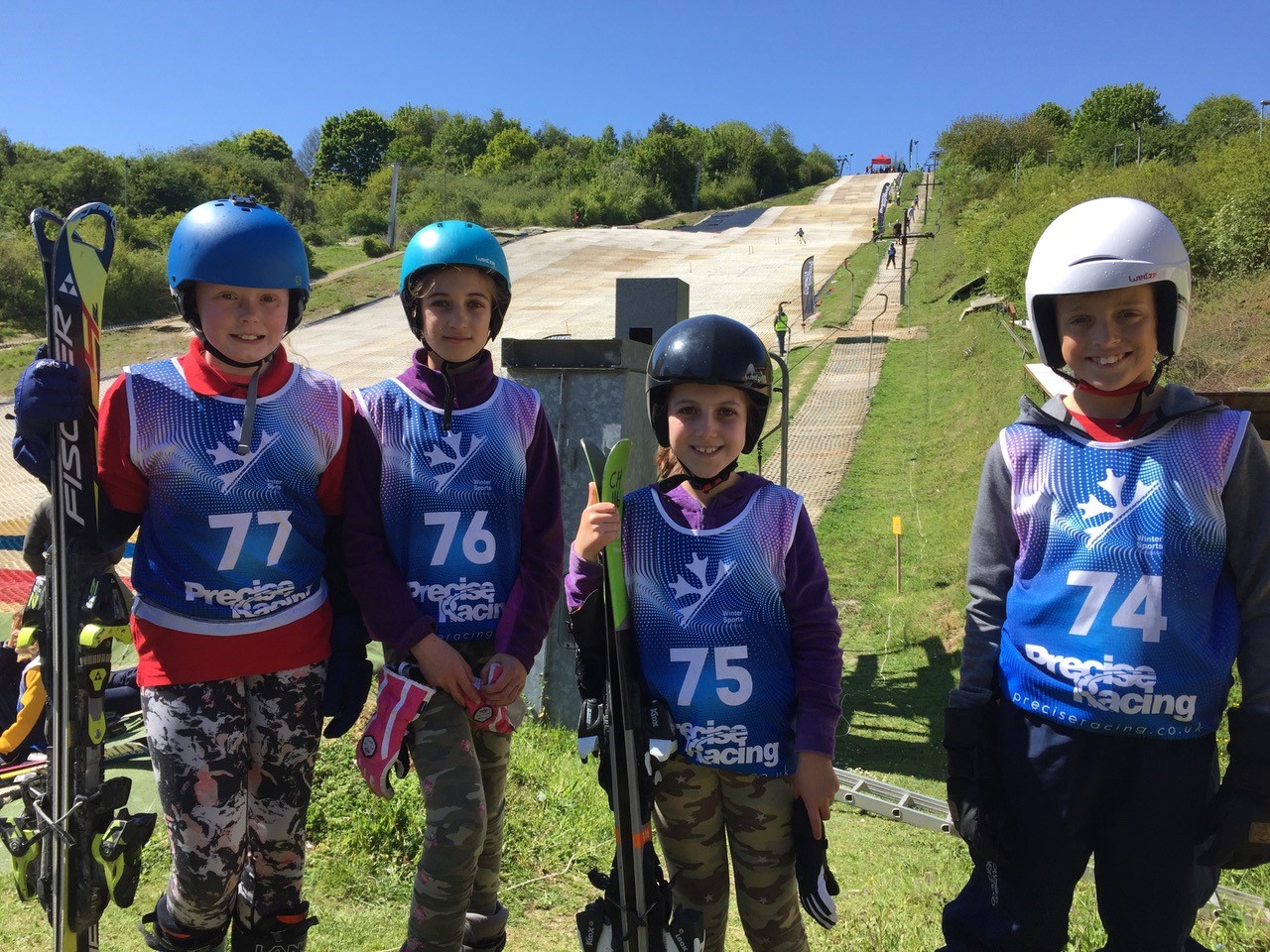 Credit goes to the year 5 and 6 pupils who all joined the team late on and raced in a very competitive ‘mixed senior primary' category.  Considering these pupils only had a few weeks training, they should be very proud of their performance.

The year 4 team won a silver medal for a the 'mixed junior primary’ category. 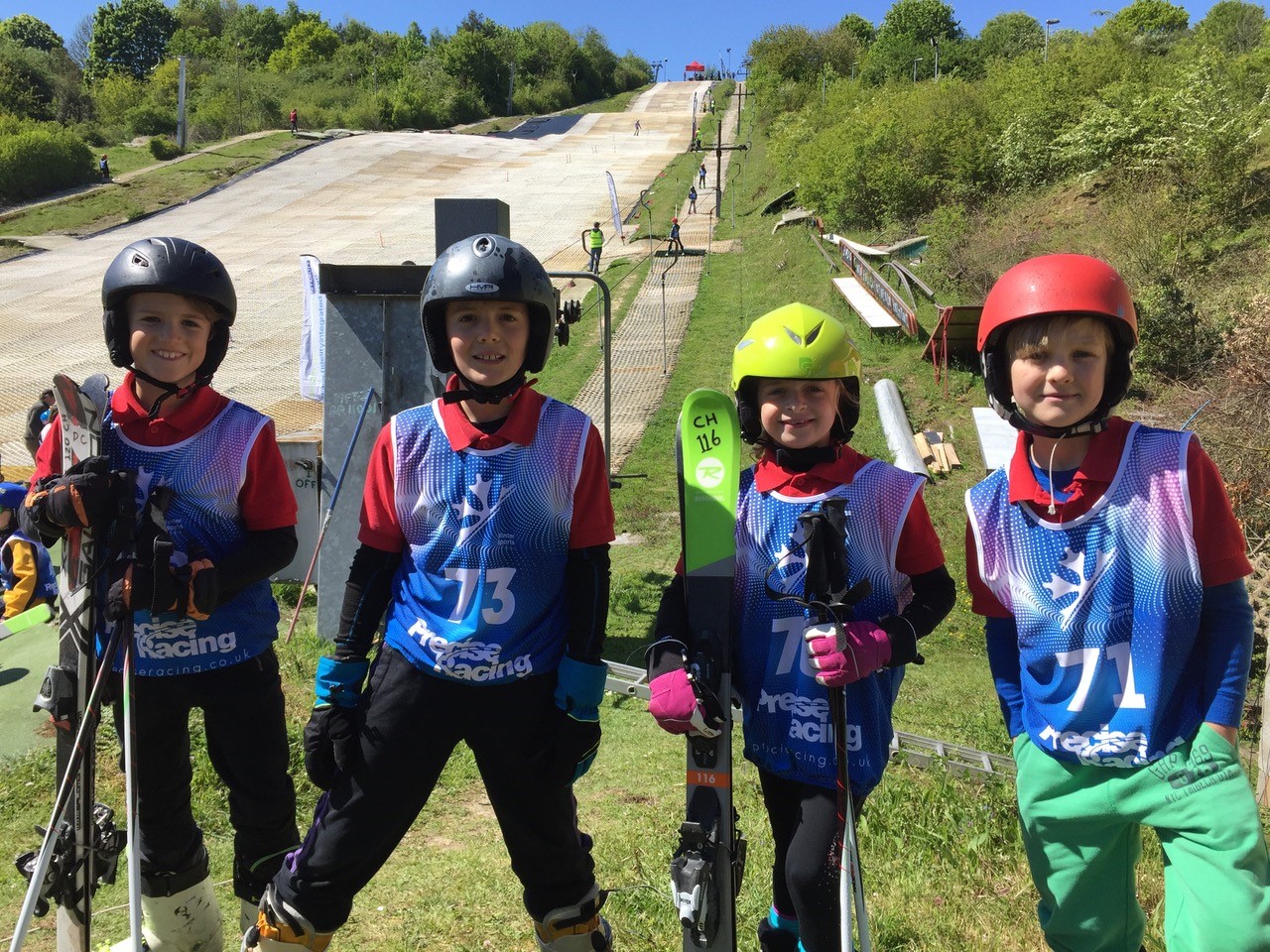 Additionally, in the afternoon all teams are split up into 20 new teams based on their ability.  These new teams then raced head to head in a dual slalom.  Coincidentally Tommie and Eva were placed in a new team together and following this knock out competition their team secured a bronze medal, narrowly missing out on the silver.  Great achievement!

They all did an amazing job and conducted themselves brilliantly.  Mr M Pryor, Parent

We had a fantastic day at the schools football tournament on Saturday 18th. Our team won 4 and lost 2. Every member of the team was outstanding but were knocked out by a very strong Groombridge team.

The girls team developed as the tournament went on. They lost their first game 5-0 and then went on to win and draw the next games. It was great to see their confidence in tackles develop.  Annabelle scored our winning goals.

Congratulations to the boys football team. They won the school league and received medals and a trophy. 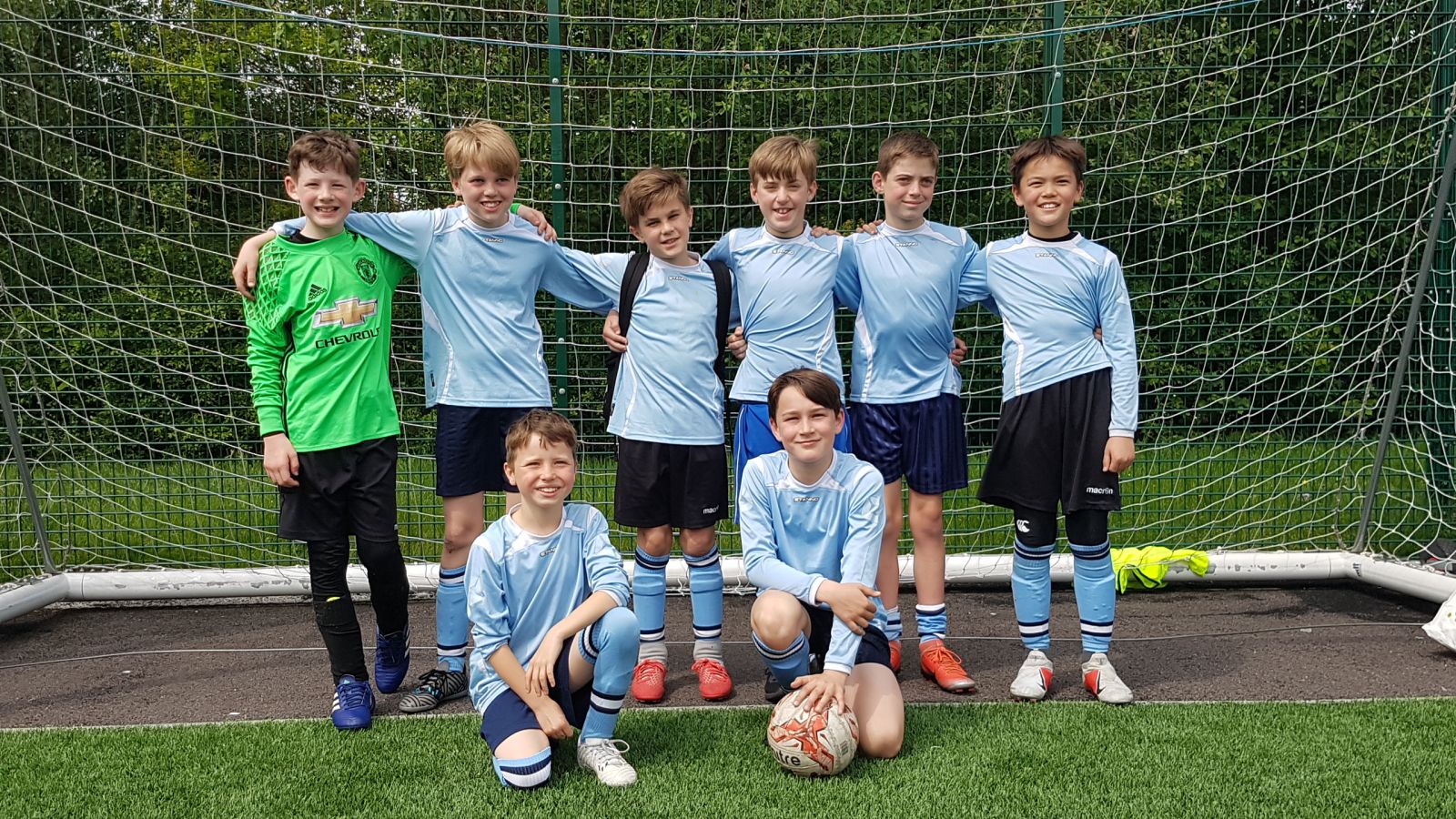 Two teams took part in the Bells Yew Green cricket competition. The A team received bronze medals. The B team won one of their matches, they produced some excellent bowling and catches.  We were really proud when another teacher commented on how supportive our B team were. They worked really well as a team and continued to encourage each other throughout the afternoon.

Two teams from year 3 and 4 took part in a hockey tournament on Monday 4th March. Both teams played exceptionally in the group stages and qualified for the quarterfinals. The teams were knocked out at this stage by very strong Claremont and St Peters Teams (these teams went on to come 1st and 2nd overall).  Our teams were placed 6th and 7th out of the 16 teams competing. Player of the A team was Bella Jones and Player of the B team was Mathew Osborne. A big thank you to Mrs Lott for helping with team management.  Well done to everyone - 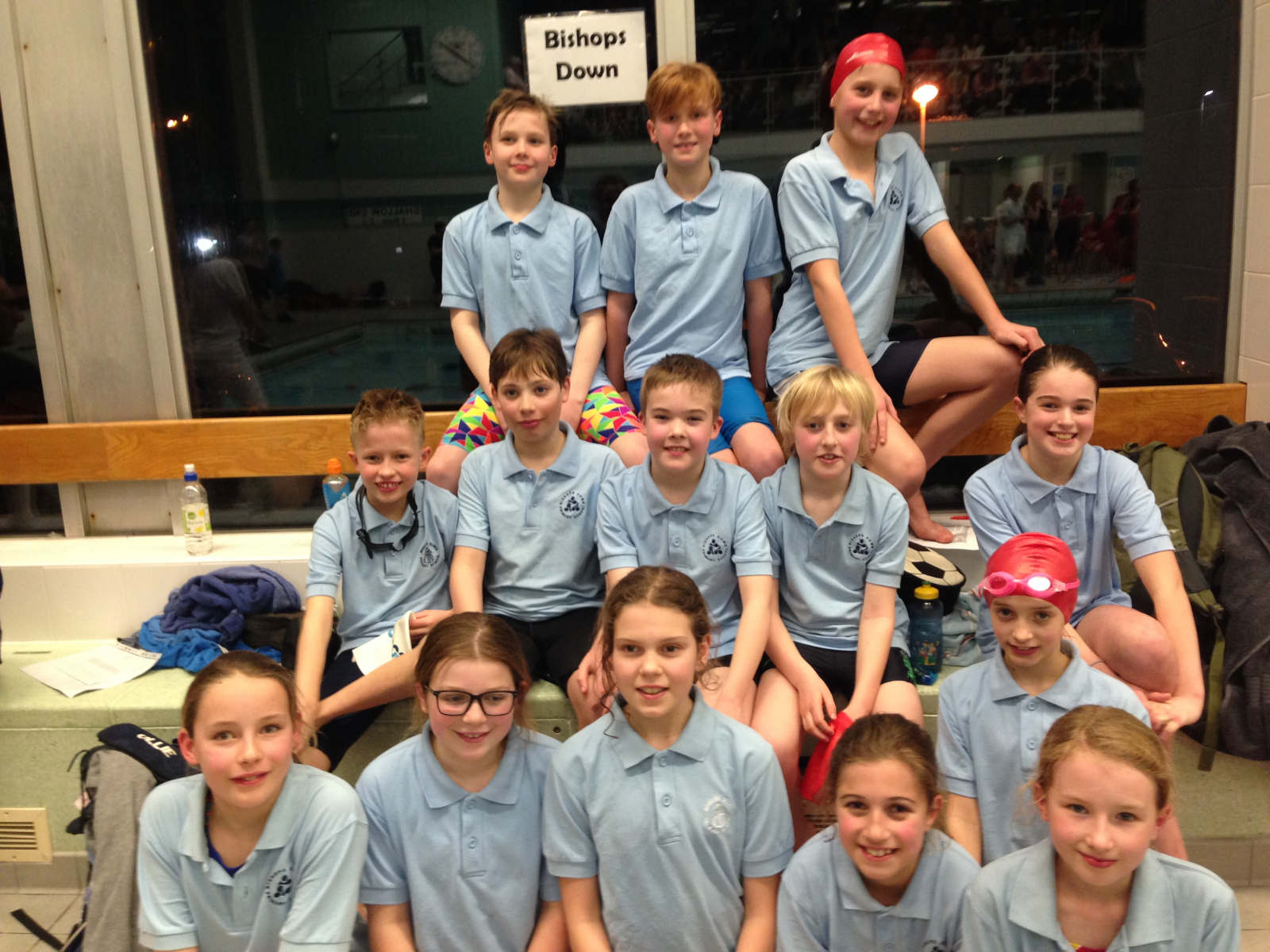 Our Gala team competed in the Primary Schools Swimming Gala on Wednesday 21st February. All swimmers were amazing with everyone finishing in the top 3 and Leo qualifying for the diving finals. Our outstanding 1st place results came from Scarlet in backstroke, Phoebe  in front crawl, Isabella in front crawl, Archie in breaststroke and two 1sts for Freddie in the year 5 and year 6 backstroke. We came 2nd place overall which is a fantastic achievement. Thank you to Mrs Gage for her team management at the pool side.

A team of athletes competed in the Primary School Indoor Athletics competition on 20th February. They each competed in 2 field events and 2 track events. Everyone contributed to our overall score with our outstanding results being scored in boys' chest push, girls' 5 strides, girls' Javelin and the vertical jump. We were placed 4th out of 10 schools. We are really proud of our result.  Thank you to Mr Dawes for helping with team management. 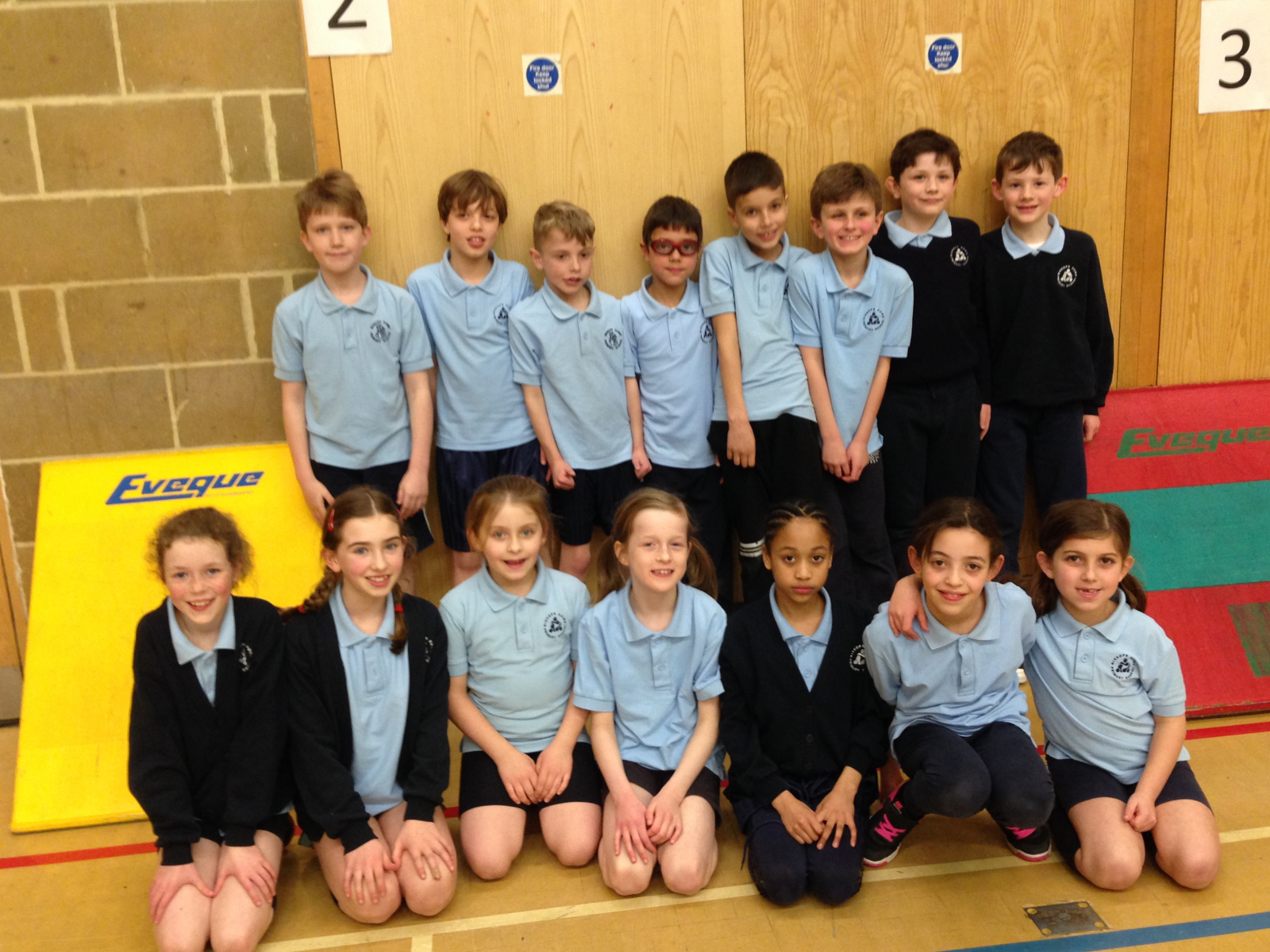 Two teams attended the year 3-4 Hockey tournament and Tunbridge Wells Girls School. We are extremely proud of how they played and conducted themselves. Most of the children had only played hockey for 1 term and had not represented the school before. We had some great wins and draws leading to us coming 2nd in our group after being beaten by a strong Langton team.  Players of the tournament were Henry T and Mathew Hand Olivia G for her defending skills. We would like to thank Mrs Tuson and Mrs Nolan for their team management.

Bishops Down C Ollie F, Murphy, Freddie, Scarlet, Rosie, Phoebe and William B). Unfortunately they didn’t win a match in a very tough group but showed all of the school values and battled every match and enjoyed the experience. Player of the team was Freddie J.

They came top of their group after winning against St Peters, Claremont A and Temple Grove. They were finally knocked out in the quarter finals by St Matthews in a fast and exciting game. Player of the team was Archie S.

Bishops Down A (Archie Y, Ollie F, Jack B, Teddy, Matilda and Isabella).

They had a mixture of wins and draws with a loss against Broadwater Down 6-5. This put them 2nd in their group and through to the quarter finals where they were knocked out by an outstanding St James team.

Charlie R was selected by the Skinners sports leaders for his outstanding play.  He was 1 of 4 children chosen from the 15 teams and received a t-shirt.  We would all like to thank Mr Ralph and Mrs Foot for their team management.

Redwood class worked together on counterbalance and countertension during their gymnastic lesson. They realised the importance of teamwork and how to engage their core muscles to succeed in the more challenging positions.

On Wednesday 22nd of March 2017 Bishops Down B team competed in a hockey tournament.  They played against Claremont, St James, St Matthews and St Pauls - won 2, lost 2.  In the playoffs it came down to penalties against St James and BD team narrowly missed.  Well done everyone for a great tournament. 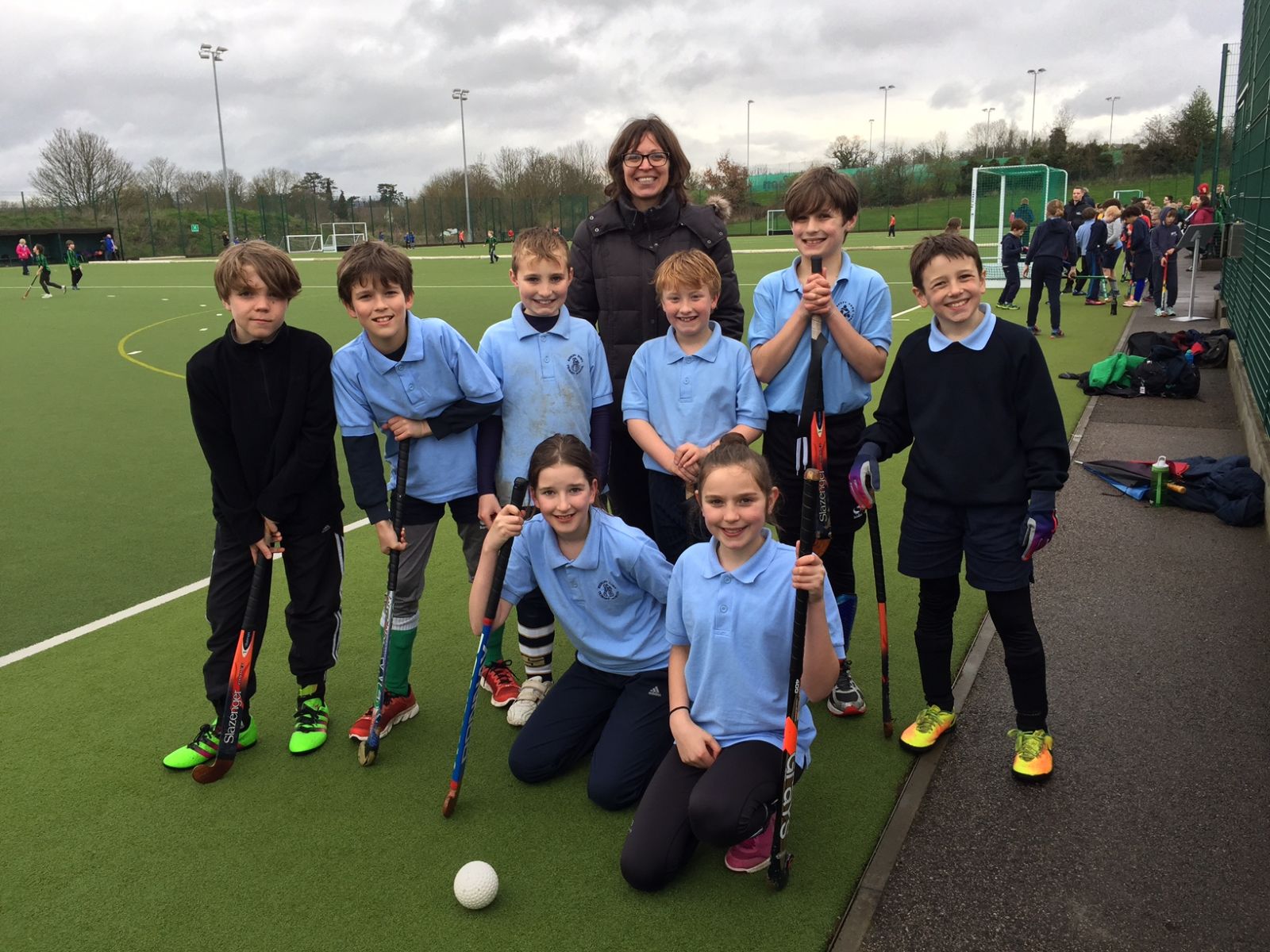